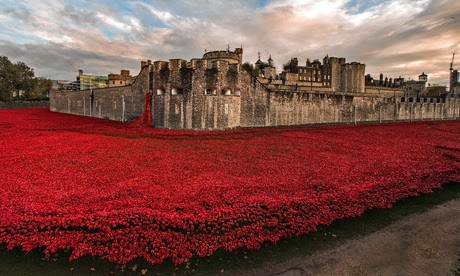 Blood Swept Lands and Seas of Red has been one of the most popular and successful artists' installations in my lifetime. Created by ceramic artist Paul Cummins, with a setting by stage designer Tom Piper, 888,246 ceramic poppies have been progressively laid in the moat of the Tower of London to commemorate the centenary of the start of World War One – each poppy representing a British or colonial service person killed in the war.

I was unable to visit whilst the poppies were 'growing' in size, and now that I have the time, the crowds are so immense I cannot get near it! Up to 4 million are expected to have visited before it closes. They have begun floodlighting it at overnight, so perhaps a late night or early morning visit is in order before it is dismantled on November 12th (just after Remembrance Day). However, with the prime minister now jumping on the bandwagon, the 'Wave' segment (which surrounds the entrance to the Tower) will now apparently be able to be viewed until the end of the month whilst volunteers remove the rest. 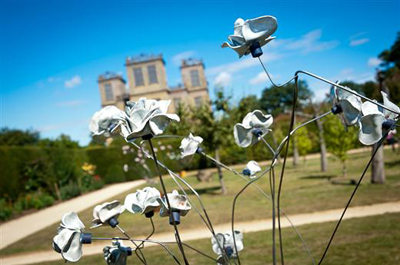 I discovered Paul Cummins' work back in June 2012 when I was creating my own 'ceramic flowers' from my vast collection of blue and white fragments for an outside installation at Creekside Centre. So I am really pleased his poppies have moved so many people. The piece above was made for Chatsworth House, and below are some of my 'flowers' – blue and white fragments attached to steel rods both short and tall, and 'planted' in the earth. 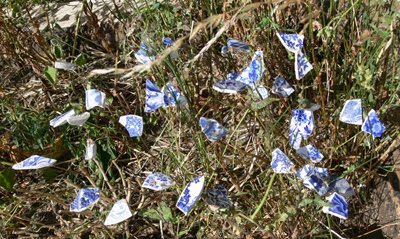 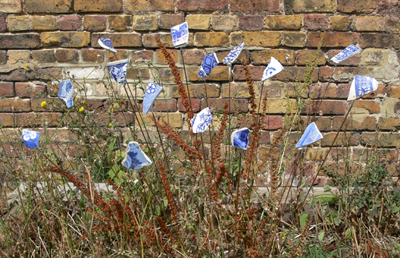 Since I posted in 2012, Paul has got a proper website – www.paulcumminsceramics.com. See him talking about the work on the Telegraph's website here. Such a nice guy! And great to see 'art' finally having some relevance and giving meaning to ordinary people.

Even though I had not yet seen the poppies, I purchased two (£25 each) at the beginning of October – one to be a Xmas present for my mother who's had a terrible year (a truly 'annus horribilus') after her home was flooded in February. This week George Osborne actually did something good for a change and decided to 'waive' the VAT so that £1million more could go to the six veterans' charities (Cobesco, Combat Stress, Coming Home, Help for Heroes, the British Legion and the SSAFA) benefiting from the sales. Both her brothers had careers in the RAF, her father served in the 2nd World War as did my father, but one uncle has relied heavily on Combat Stress for some years after serving in Northern Ireland. Plus, my late father's birthday is November 10th, the day before  Remembrance Day. Whether her gift will arrive in time now that part of the show might be extended is another matter!

The other important thing about this piece is that the poppies were made by hand in Derby by local people, using a traditional pottery production line that had to work 24/7 to produce them on time. If such a project had been masterminded by a corporate business (perhaps thought up by a clever advertising agency), they would probably have been manufactured very cheaply in a Chinese city factory and still sold for £25 each. With Paul's project however, there are echoes of Ai Wei Wei's porcelain sunflower seeds, which were not industrially produced but hand-crafted by hundreds of skilled artisans.

Yesterday it was a beautiful sunny day, so I finally jumped on the 188 bus and went up the road to see the installation, returning on the number 47. How I have left it so long when it is so near, I cannot explain! It was already being dismantled by lots of volunteers. Later in the evening I returned with a couple of friends to see the floodlit night time display. 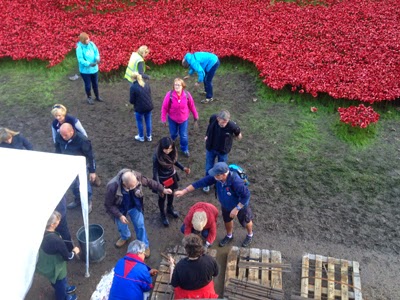 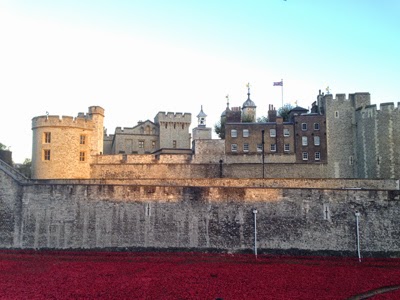 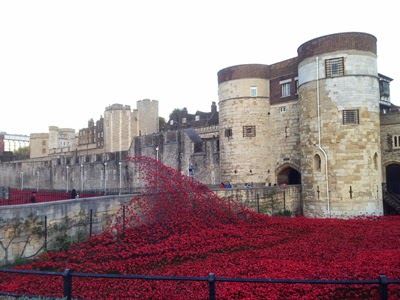 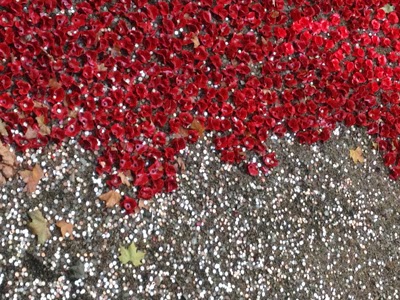 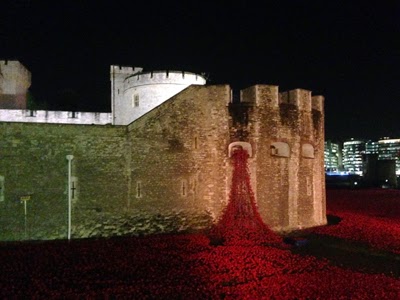 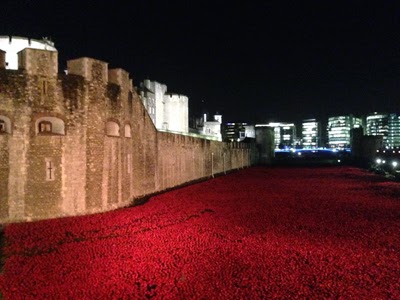 Posted by Sue No comments:

All images © Sue Lawes unless otherwise credited and may not be used without permission.